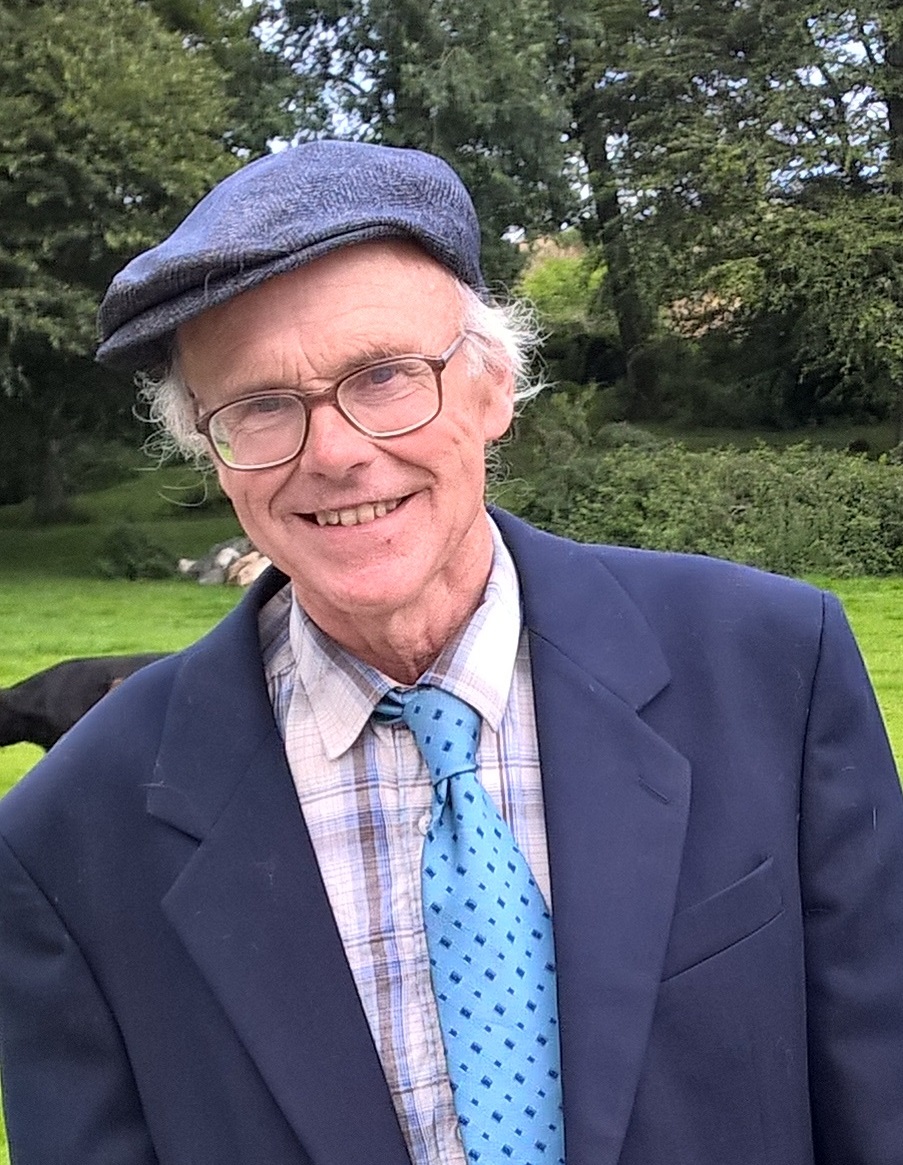 Tom McDonald was born in Barrystown Wellingtonbridge, and spent his early years in the parish of Bannow before his family moved to Ballymackessy, Clonroche.

Tom was a historian of note and was passionate about the history of his home county. He had a particular fascination for and knowledge of the parish of his birth. He invested countless hours in Wexford library researching all sources of information relating to Bannow.

His blog, always signed ‘The Boy from Barrystown’, is a unique and entertaining insight into all aspects of the day to day life of the people of the parish for the past 150 years. From the very first meeting of the Bannow Historical Society in Stafford’s of Tullycanna, Tom was unfailingly supportive of our society and its events for the next 14 years. With his passing in 2017 our society has lost a part of its soul. R.I.P.

Flax Wheels for the Old Women in Clonmines in 1847

Hi, it is the boy from Barrystown, inundated with good wishes for his birthday: may one think of any day more important than that of the birthday of the wily boy from beside the mine pits, excepting the most important feast days of Christmas, St Patrick’s Day, Easter time, perhaps? To paraphrase some famous boxer, I am the greatest—of the historians, that is. If the great vocation of history had not called me, I might have been the greatest at Gaelic Football or hurling or even at sowing flowers. At the history meeting last Wednesday night I recited an extract from “The Deserted Village”— “While words of learned length and thundering sound Amazed the gazing rustics ranged around, And still they gazed and still the wonder grew That one small head could carry all he knew…” The boy from Barrystown would really want a lorry—at least as big as

The Fame of Dean Cleary of Maxboley

Hi, it is the boy from Barrystown, erudite, scholarly, eloquent, moves, acts and talks with panache, without equal, historian supreme, an intelligence far in excess of that of Einstein; a superb florist, a possessor of a poetic touch, an athlete and above all else, the most wily and devious of them all, that wily boy from beside the mine-pits. My birthday is on next Saturday the 22nd of April with all the traditional celebrations and fireworks. A potted biography of Dean Cleary in The People on the 3rd of May 1952 stated that he was born in the parish of Carrig-on-Bannow in 1796 but I am certain that he was born in Maxboley, Ballymitty. The article added—“studied in the old seminary of his native county, then at Kilkenny College and was ordained a priest in the old Enniscorthy Cathedral by the Most Rev. Dr Keating on Easter Sunday 1820….With

Hi, it is the boy from Barrystown, the most devious and wily of them all: that is a truth that nobody will contest! My birthday is on Saturday the 22nd of April. I was born into a world (and an Ireland) utterly different from the present one—a place of horses and donkeys, bicycles, a scarcity of meat dinners, footballers and hurlers, small fields, ditches, shores, Marigold weeds, tribes of rats and mice, small dwellings, some thatched, dusty and narrow roads but tarmacadam was coming in, small lorries, radios, etc et al. People on working days wore greasy clothes and the awful corduroy trousers: to me they had a metaphorical smell. The rain, the sleet, the hints of snow, the cold and the mostly cool summers were, of course, there. There were odd very warm summers, also. In 1835 Mr Francis Leigh of Rosegarland was at Westminster Parliament giving evidence

Hi, it is the boy from Barrystown, erudite, scholarly, eloquent, moves, acts and talks with panache, without equal, historian supreme, an intelligence far in excess of that of Einstein; a superb florist, a possessor of a poetic touch, an athlete and above all else, the most wily and devious of them all, that wily boy from beside the mine-pits. My birthday is on the 22nd of April with the traditional celebrations. Kathleen Holohan B. Ed. will make a presentation on National Education from 1850 to O’Malley’s free education in 1967 with special reference to Clonroche National Schools on Wednesday April 19th at 8.30pm in Clonroche National School. She has done extensive research on the history of Clonroche National Schools. The event is under the auspices of Clonroche Historical Society. From The New Ross Standard on the 1st of October 1898:– “OVER BANNOW BAR Messrs Pettigrew, Wexford, recently published a

Hi, it is the boy from Barrystown, the sheer genius, historian supreme, erudite, scholarly, an intelligence far  in excess of Einstein; moves with panache and talks likewise—that most devious and wily boy from beside the mine pits. My former teacher Professor emeritus Ronan J. Fanning, a most distinguished historian, recently passed from this world. My birthday is on the 22nd of April and I hope by then that the dark and claustrophobic clouds of the long winter time will have finally passed. I do not agree with the recent changes made in regard to Gaelic games: I regard tradition as integral to those games and the September Sundays, the late harvest time in a previous era, should be sacrosanct as the dates for the Hurling and Football Finals. I see no purpose to the Super 8 mine league in lieu of Football Quarter Finals. As I see it, the

Did Fr O’Sullivan Have A Cramp at Blackhall?

I have been debating frantically with myself for the past two weeks or so: should I write in my little memoir that the soubriquet of “that wily boy” is now widely applied to me? I think that the soubriquet not only describes an aspect of my personality and life but maybe describes the battle of wits that those who went before me had to engage in to make a livelihood and survive. My father and his brothers were innately clever but I am afraid of offending somebody or other by writing in that vein. Maybe some of the millions of my readers will advise me on the matter. There is no need for me to dwell on all the other exciting attributes of myself. 6 April 1765 “Lease by Hon. Henry Loftus of Dublin to Richard King of Barrystown, Co. Wexford, gentleman, for £139 18 shillings 7 and a half

£29 To Sink a Well at Tullicanna

Hi, it is the boy from Barrystown, charming and charismatic, a right boyo, a sheer genius, historian supreme, an intelligence greater that Einstein, scholarly, erudite, moves and talks with panache, eloquent and poetic. It seems now that I have two birthdays: my Baptism Certificate gives my date of birth as 23rd of April and the Birth Certificate gives my birth date as 22nd of April. I believe the latter date but surely it would be good idea to celebrate the two birthdays! The Kings owned or acquired all of Barrystown, about 500 acres. Jonas put himself forward for election as Coroner but failed to get the job: the remuneration was comparatively mediocre and Jonas may have been pinched for money in order to seek such a post. Richard King had tenant and lands at Brandane. Jonas later lived in Dublin. From The People the 29th of July 1911:– “Sale

The Good Ship The Demerary

Hi, it is the boy from Barrystown who should really change his name, as using his present name they are so many contacting me about historical issues. But who could blame them? Where will my like be ever found again: a sheer genius with an intelligence greater than that of Einstein, blessed among the women, erudite, scholarly, eloquent, moves and speaks with panache, truly larger than life and, above all else, the most devious and wily of them all, that wily boy from beside the mine pits. Whatever about acquiring a second name, it does seem that I have acquired a second birthday! On perusing my Baptismal Certificate, kindly and promptly sent to me by Father Kehoe, I see that Fr John O’Brien wrote that I was born on the 23rd of April 1951. My birth certificate states that I was born on the 22nd of April, 1951. Such

Hi, it is the boy from Barrystown, charming, charismatic, erudite, scholarly, eloquent; moves and talks with panache, inspired and inspiring, historian supreme, a genius, an intelligence far greater than Einstein; blessed among women and destined to be the historian of Bannow, an area steeped in history. My likes will never walk this earth again… From The Enniscorthy Guardian of the 14th of August 1926:– “Attacked By A Bull A man, named Cogley, having liberated a bull from a house in an out-farm at Quitchery, near Ballymitty, was driving him across a yard when the animal turned and attacked him, knocking him down. The driver, however, succeeded in driving off the attack and escaped with a severe shock.” John Ryan the author of the billious “Popery Unmasked etc” explained the rationale of Rev. William Hickey (previously Rector at Bannow) using the pseudonym of Martin Doyle ;–“I should explain that the