Welcome to the official website of the Bannow Historical Society.

The brainchild of Michael Martin, The Bannow Historical Society was founded in 2005. We are affiliated to the Federation of Local History Societies.

The objective of the Society is to research record and preserve the unique history of the parish of Bannow/Ballymitty. Our goal is to raise awareness within the wider community of the great wealth of local history in the parish, to exchange ideas and to generate a sense of curiosity and pride in our past.

At present there are 107 members in the society. The cost is €10.00 annually. Do join us!……. please e-mail info@bannowhistory.ie and a committee member will contact you. 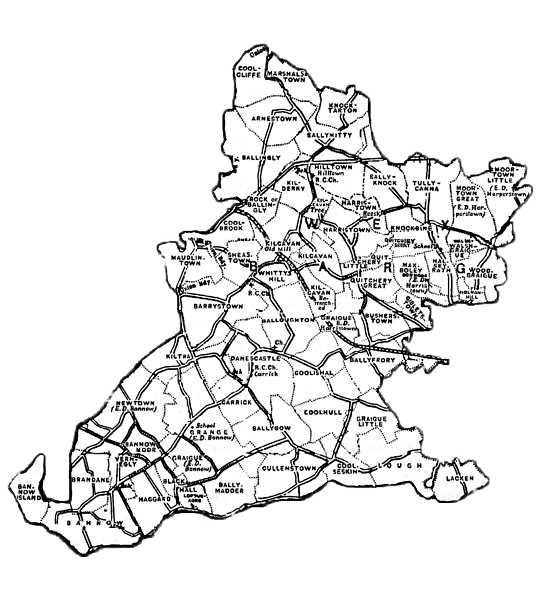 A Note From Our Chairperson

As the current chairperson I am entrusted with expressing the hopes and aspirations of the Bannow Historical Society. On assuming the chair of this society in 2017, Rich Howlin wrote an excellent introduction to this website. As a summary of what our society is about and all that it aspires to, it simply says it all. In recognition of that fact I am going to quote Rich word for word:

”The main aim of Bannow Historical Society is to whet the history appetites of our readers, budding historians and the curious. Bannow Parish is steeped in history and we should feel very proud and protective of that fact and also of our unique heritage. It is vital that that history and heritage is passed on to the next generation and indeed to all future generations. Local history is now an important element of the Primary School Curriculum and all of us have a duty to ensure our children are made aware of the past. History is an on-going process – the present time will all too soon become the past and indeed the future is strongly linked to the present. We live in a fast-changing technological age and sometimes it seems that the past has no place there, but this is where the enthusiasm and knowledge of the historian comes into play. Tell your children, grand-children and any other young people who will listen to you about their family history, encourage them to get involved in putting together your family tree and above all, encourage them to read, research and grow to love history”.

Bannow is an area of unique historical and scientific interest. Its history is closely linked with that of Ireland and the Anglo and Cambro Normans, in particular, had a huge impact on the area. Evidence of their settlement and cultural diversity is found all around us. The Danish and Norman surnames are still evident in the area. The wonderful fortified church on Bannow Island, the Norman keeps and townlands record their contribution to the historic and cultural landscape. The romantic tale of the lost town of Bannow, the Irish Herculaneum, and the history of Grantstown Priory are also of particular interest. Tom Boyse, the local landlord, was a leading figure in Co. Wexford up to his death in 1854; he was driven by a conviction that all human beings are made in God’s image and was passionate in his quest for civil and religious liberty. Daniel O’Connell told the Catholic Association around 1836 that it would be idle for him to attempt a eulogy to Tom Boyse of Bannow as he did not have words adequate to describe his greatness. The well-known author, Anne Maria Hall, spent her formative years at the beginning of the nineteenth century with her mother, Mrs. Fielding, at George Carr’s mansion in Graigue. She became a famous writer of novels, short stories and travel works, and was honoured by Queen Victoria. Fr. Phillp Doyle from Maudlintown was a teacher, dramatist, historian and poet – his poem regarding the three crosses of Carrig is still widely quoted. The Rev. William Hickey was rector at Bannow from 1820-27 and, during that time, established an important school for the study of agriculture on a wet farm of about 40 acres donated by Sam Boyse. These are only some of the interesting features associated with the district. It is my hope that visitors to the Bannow area will continue to explore our wonderful heritage as Bannow Historical Society continues to document, investigate and protect our culture and traditions.

We are very keen to attract new members to The Bannow Historical Society. We are a vibrant community. We are active on quite a number of fronts with a number of lectures, talks and walks every year. Our annual historical tour is always booked out. We work hard to preserve our physical heritage – Bannow Church, nearing completion, is an ongoing project, and we have a number of others in the pipeline. The Bannow 1169 Commemoration was a huge success. The  BHS Journal is highly respected…our fourth is due out shortly.

Most importantly we are a social group, interactive and involved.

We look forward to having you on board!

To become a member of the Bannow Historical Society, simply click the button below and fill in your details.

Alternatively you can download and print a membership form.